We are reopening for in person worship on August 16. Please review the guidelines and instructions and pre-register ... more info 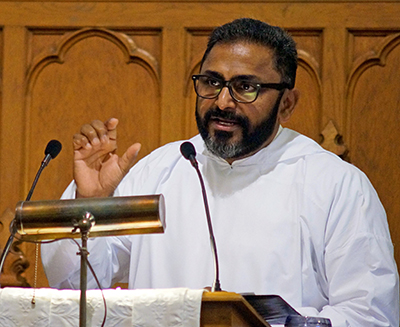 Shibu Oommen joined Crossroads Church in 2003. He returned to his native country India, to attend the Presbyterian Theological Seminary, which has had a long relationship with the church. He came back to the United States in 2008 as part of employment. Ever since he has been active with different ministries of Crossroads. He is a passionate evangelist mainly reaching out to the Indian and Pakistani communities. He finished his Master in Divinity from Presbyterian Theological Seminary, Dehradun, India. He became a ruling elder of Crossroads in 2010. In 2012, he was ordained as a Teaching Elder in the PCA and joined the Crossroads Church staff as an Assistant Pastor working primarily with young adults and South Asians living in Upper Darby and the surrounding area. Pastor Oommen is also a missionary with Presbyterian Evangelistic Fellowship. He is married to Mary, who has been partnering along with him in the ministry.