We are open for in person worship and have room for you! Please review the guidelines and pre-register ... more info 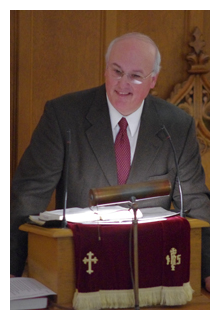 Dr. Timothy Zimmerman Witmer grew up in New Holland, Pennsylvania where he was raised in a Christian home. He attended West Chester University where he became a Christian through the ministry of Campus Crusade for Christ. After graduating with a Master of Arts in Philosophy (1975) he attended Westminster Theological Seminary (Philadelphia) where he completed the Master of Divinity degree. On November 11, 1979 he was ordained as a Teaching Elder in the Presbyterian Church in America (PCA) and was installed as Assistant Pastor of Berith (now Springton Lake) Presbyterian Church in Newtown Square, Pennsylvania. He was called as Pastor of Crossroads Community Church in Upper Darby, Pennsylvania and was installed on December 14, 1986. Dr. Witmer serves as the Minister of Preaching at Crossroads Community Church, which has become one of the most ethnically diverse congregations in the Presbyterian Church in America, reflecting the remarkable cultural diversity of Upper Darby, Pennsylvania.

While at Crossroads he began his doctoral studies at Reformed Theological Seminary (Orlando). His dissertation led him to the subject of shepherding as it related to the work of the elder in preventing member inactivity. His advisor was Dr. Steve Childers. He received his Doctor of Ministry degree in 1998. He began to lead “Shepherd Our Sheep” (SOS) workshops and seminars to help church leaders understand the importance of shepherding their congregations. In order to advance this ministry he founded The Shepherds’ Institute in 2000.

Tim has played tuba in several professional musical ensembles and has performed with the Westminster Brass since 1976.

He married Barbara, his high school sweetheart, on July 26, 1975. They have three children: Sara, who is married to Joel Schuster, the Pastor of the Marsh Creek Community Church; Rebecca; and Nathan. The Witmers have four grandchildren: Mikayla, Kathryn, Emma, and Benjamin.

He was motivated to write The Shepherd Leader as he became aware of increasing numbers of congregations who were like sheep without a shepherd. His objective is to see all church leaders embrace their calling to shepherd the flock. Please click on "http://www.theshepherdleader.com/institute.php" to learn more about consulting services to help your church implement the biblical principles found in The Shepherd Leader: Achieving Effective Shepherding in Your Church.

After his long and successful service as a beloved Pastor, Dr. Witmer retired as Senior Pastor and Minister of Preaching on January 12, 2014 and was named Pastor Emeritus.

The Shepherd Leader at Home: Knowing, Leading, Protecting, and Providing for Your Family, Crossway/Good News Publishers, 2012.

Contributor: “Perspectives on Emerging Church Leadership” in Globalization and Its Effects on Urban Ministry in the 21st Century, edited by Susan Baker, 2009.

Contributor: “The Development of Competence in Ministry Skills” in Preparing for Ministry: A Practical Guide to Theological Field Education, edited by George Hillman,2008.